First off, we refer to this report from the European Commission from October 2020. This report examines the subsidies that have been used in the context of energy policy since 2008. On page 16 of the PDF (page 13 of the document) we come across this overview: 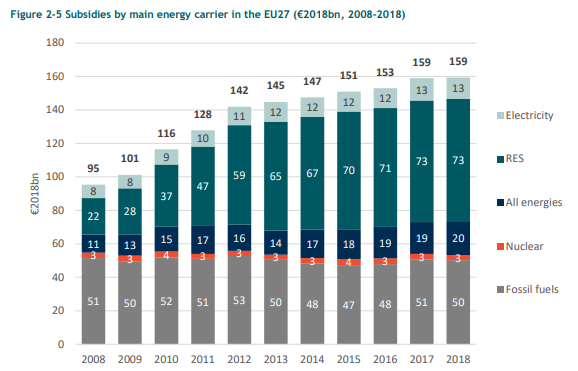 RES stands for ‘renewable energy sources’. What is immediately noticeable is how much has gone into this. Added together, the period 2008-2018 amounts to €612 billion. The increase in the most recent years suggests that it has only increased further since 2018. Let’s cautiously extrapolate from this that in 2022 we will have put in €800 billion in subsidies. Incidentally, the €3 billion per year in subsidy for nuclear energy was mainly in the light of the phasing out of this sector, according to the report (page 15).

A subsidy in itself is not inherently good or bad. As a society, you make an investment in the hope that certain developments will follow. In this case, the hope was for a strong renewable energy sector. So what are the results?

In 2020, renewable energy accounted for 38.8% of electricity consumption, or 17.4% of primary energy. The latter is all the energy that we consume. Included in this are also heat sources that we use in industry, but think also of district heating systems which are currently mainly powered by fossil fuels. For nuclear energy, those figures are 24.6% and 12.7% respectively.

Fine, now let’s look at nuclear energy. Hinkley Point C is an example of a modern EPR power station, consisting of two reactors of 1600 MWe, construction of which has now been greatly delayed and (partly because of this) the costs have risen to approximately €30 billion, or €15 billion per reactor. This seems like a lot, but it isn’t.

For a broader background, we would like to refer to this article on replanet.nl, but for now we’ll deal with this cost breakdown, which is explained in more detail in the article. 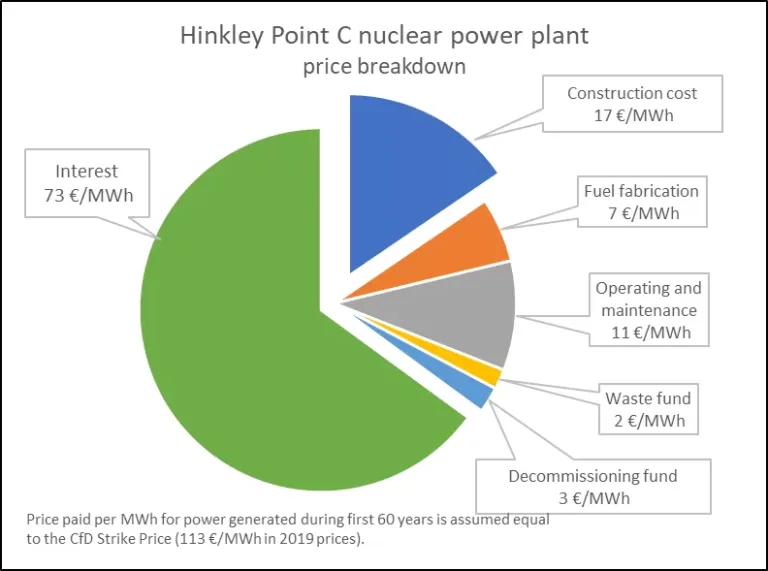 As you can see, ⅔ of the price consists of interest. This is because HPC is built with private loans, which are therefore interest-bearing. This is a fundamental difference compared to subsidies, which do not have this. Incidentally, this interest is not necessarily a big problem. For example, the money for HPC comes from British pension funds, so the money remains within British society and is only ‘pumped around’ on a macroeconomic scale.

Let’s do a short calculation, let’s pretend that those €800 billion in subsidies were spent on developing nuclear energy. Let us further assume that these subsidies would cover 100% of the costs (this is not the case with renewable energy, by the way, but we simplify the picture for now). How far do we get?

The costs per reactor now fall to €5 billion each. After all, the interest is gone. Incidentally, it is plausible that with such numbers the costs per reactor will decrease, due to more efficient construction through more experience and large-scale purchasing of materials. So let’s assume €4 billion each. So for €800 billion we will build 200 modern EPR reactors. How much does this get us?

If we use this in a smart way, we can also extract the same amount of energy from these reactors in heat and, for example, use it for district heating, a concept that is already being used in the Czech Republic and Slovakia. In Finland there are plans to even transport this heat over a distance of 80 kilometers. As a whole, the EU uses about 9350 PJ, or 2600 TWh, of heating energy.

That is, collectively, ~5000 TWh of a total of 6700 TWh of primary energy that was produced in 2020. So, about 75% of all our energy comes from nuclear energy in this thought experiment. A whole lot better than the 17.4% that renewable energy achieves. So, why is nuclear energy expensive again?

Now there is a caveat to this. Unlike installing solar panels, which is low-skilled and poorly paid work, building nuclear power plants requires a highly skilled workforce. Following the example of HPC, 22,000 people are on the project, 6,300 of whom are on the construction site itself. Say that for a larger project, due to overlap in the suppliers, fewer people are needed per reactor, and let’s assume that this number is 15,000. If we then want to build 200 reactors in a period of 20 years, we will have to start on 10 new reactors every year. With an average construction time of ten years, you will have 1.5 million people at work at the peak. It is an open question whether we can actually achieve this at a European level.

Unlike the 1970s and 1980s, when France was fully engaged in implementing the Messmer plan, Europe has been firmly deindustrialized. A lot of industry has left for China and other Asian countries. This led to seeing a shift since the 1990s in education towards a ‘knowledge economy’. The result was, among other things, that higher education was made more expensive, and things such as a debt system were introduced in the Netherlands in order to ‘adjust’ (reduce) the number of higher educated people. It is very likely that such a project also involves a substantial investment in education that should be made available cheaply or for free. Of course, this also costs time and money, but I do think that this will benefit us as a society anyway, far beyond the immediate need for new nuclear power stations.

A frequently heard argument is that sun and wind are simply very cheap, see for example this recent piece in The Guardian, if you look at the LCOE. This has fallen sharply in recent years. Ergo, nuclear energy can never keep up with this, right?

What exactly is LCOE? It stands for Levelized Costs of Energy (or Electricity, depending on the source) and the idea is simple and elegant: you build a power plant and divide its costs by the number of years it has been active. You then express this in MWh or kWh.

There are a number of agencies that calculate an LCOE, but Lazard is a leader in the field. Lazard is an investment bank and publishes figures on these costs every year. This is also an important hint to the problem with LCOE: after all, what is included in this overview?

For solar and wind energy, LCOE only appears to be about financing a solar or wind farm. The extra infrastructure needed to enable decentralized forms of energy? Not relevant to the LCOE.

Now solar and wind energy are also inherently intermittent, as can be clearly seen in the graph below (made by economist Edgardo Sepulveda).

The red peaks indicate the times when the sun was shining and providing energy. The blue is nuclear energy. Overview for the Canadian province of Ontario in 2021.

This is the same overview for wind energy.

Security of supply is therefore not a strong point for solar and wind energy, the two most important forms of renewable energy. However, our society relies on 24/7 security of supply. After all, we don’t say that a train only leaves when the wind blows hard enough, and you also prefer not to lie on the operating table when the lights go out or something because the sun isn’t shining…

So solar and wind have a problem. This can be solved in two ways:

How expensive? Look again at the graph of LCOE, and then at the part ‘storage’. Lazard is really a lot less positive about this:

The LCOE for solar and wind energy is therefore very low, but with the mandatory storage it suddenly becomes significantly more expensive than Lazard’s LCOE for nuclear energy.

So LCOE is only really interesting if you’re a capital investor, say a customer that Lazard would be happy with, but as a taxpayer and private consumer it’s a pretty meaningless figure. Its consistent use in discussions to ‘prove’ that solar and wind energy are extremely cheap is so far from the truth that I would call it a lie.

Towards a price per kWh

Let’s make our own estimate based on the aforementioned prices that were mentioned for HPC, which are €113 per MWh:

This is, of course, €0.11 per kWh. If we let the interest expire, as in our earlier example, we arrive at 4 cents per kWh. And this for one of the most expensive nuclear power plants ever!