The argument is well known: nuclear power causes pollution with nuclear waste for many millennia. Our children’s children may not even know how dangerous it all is, they say. Let’s tackle this argument once and for all: nuclear waste is not an actual problem.

Before discussing the waste itself, it makes sense to briefly refer to the resource consumption of the construction of various energy sources. After all, solar panels do not grow on trees, and nuclear reactors are not tree trunks.

This piece from the World Nuclear Association provides a helpful overview of the materials used: 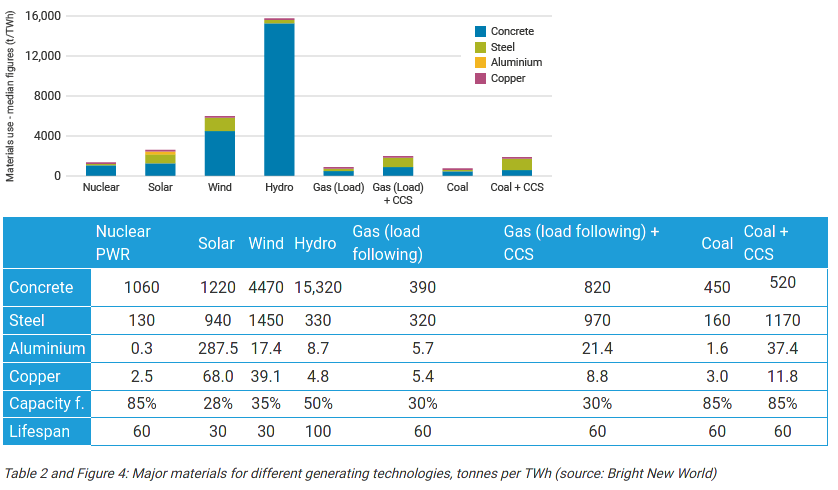 What is striking here is that quite a lot of raw materials are used per TWh for the fossil-free energy sources, especially concrete and steel, which emit large amounts of CO2. For hydropower, the high number is to be expected, given the enormous amounts of concrete that a dam contains on average.

But the amount of concrete and steel for sun and wind is striking. This has to do with the low energy density of these two. As a result, a lot of raw materials are needed to get one TWh of energy. Moreover, this is also an intermittent current, referred to in the table as ‘capacity f.(actor)’, and you actually have to also add the raw materials for storage or backup power sources (usually natural gas).

Nuclear energy, on the other hand, is not that bad. Because uranium has one of the highest energy densities known, it takes relatively little to achieve a TWh, which also has a fixed 24/7 energy supply.

Now the “backend”, the waste. Let’s start with an overview of Our world in data:

Let’s start with an overview of Our world in data:

A few things become very clear here. Fossil fuels are by far the most polluting, in terms of CO2 emissions, followed at a distance by biomass. For fossil fuels, the picture is actually not complete, because fossil fuels also cause respiratory irritation and other disease-causing symptoms, which kill up to 8 million people a year.

But solar and wind also have their own problems. This page of the European Environmental Agency packs it nicely by giving it a spin through ‘circular economy’, but in passing mentions the following ‘challenges’ for solar energy:

For PV panels it is further stated that ‘up to 95%’ can be recycled, but the EU only requires 85%. De facto this means that a lot still ends up in a landfill. A recent piece in the LA Times explains the implications of this:

Many are already winding up in landfills, where in some cases, they could potentially contaminate groundwater with toxic heavy metals such as lead, selenium and cadmium.

It should be clear that even at 5%-15% of a very large amount of solar panels this is a serious environmental problem in the making. Lead, arsenium, cadmium, and the like are going to be very toxic forever.

This brings us to nuclear waste. Anti-nuclear energy lobby group WISE has this to say about it:

After the storage period, people want a definitive solution for the waste: a place where they can leave it until it won’t do any harm in a few hundred thousand years. The big problem is that the solution has not yet been found. Nowhere in the world.

Let’s look at this further. In the first place, there is very little waste at all (this is also called ‘high-level waste’). This piece on Nuclear Pride gives a clear picture of this: Borssele produces only 1.5m³ per year of high-level radioactive waste. After almost 50 years of production since 1973, it has thus produced a total of 75m³. This is approximately two sea containers in volume.

After being in the reactor for several years, old fuel rods have to cool down. This is first done in a cooling bath for five years, after which they are kept dry and air-cooled. Moreover, this ‘waste’ mainly consists of fuel, namely uranium and plutonium. More than 95% even after three years! The rest are the actual waste products: 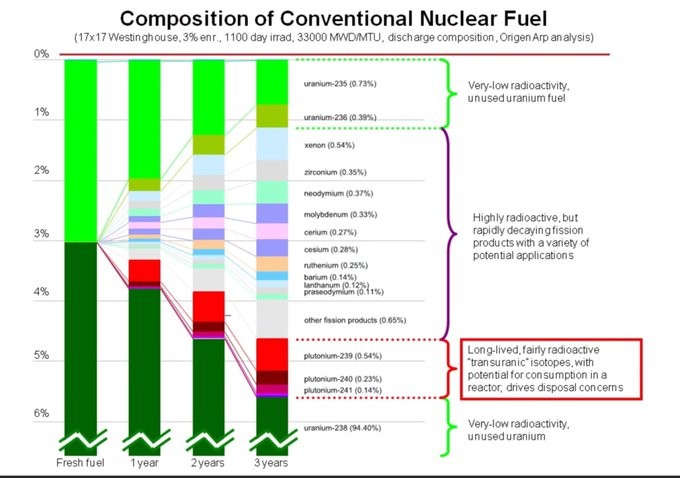 You see that this waste consists of various radioactive elements. These all have their own half-life, the time it takes to lose half of its radioactivity. Let’s run through the half-lives:

Of this row, only cesium-134 has a somewhat longer half-life. But also in this case the radioactivity after 10 half-lives is less than 1 per mille, and thus at the level of background radiation. I also put the type of radiation for each decay product, namely alpha, beta or gamma. Alpha radiation is completely harmless and doesn’t even get through a sheet of paper. Beta radiation is slightly more powerful and can cause your skin to burn like a sunburn. Gamma radiation is the most dangerous and needs a thick layer of concrete or lead to stop it. You can see that there are only four gamma emitters in this row that have a short half-life. Cesium is also a beta emitter and can be handled with some protective clothing. After 300 years, this is also harmless. You can pick it up without any problem.

In addition, a number of ‘fourth generation’ reactors are now being developed, under construction and even in production, which can actually consume this ‘waste’. For example, there is the MYHRRA project that is now being built in Belgium. The IAEA says this:

MYRRHA (Multi-purpose Hybrid Research Reactor for High-tech Applications) is a project currently under construction at the Belgian Nuclear Research Center (SCK CEN) based on the accelerator-driven system (ADS) concept that aims to address actinides, and, more particularly, the minor ones. The project seeks to demonstrate, at the engineering level, ADS and the feasibility of the transmutation of the minor actinides on an industrial scale. By reducing radiotoxicity, this could reduce the volume of high level radioactive waste by 99 per cent and the time required for storage to just 300 years.

In concrete terms, of the 75m³ that Borssele produces, 0.75m³ of real waste would remain. That’s quite a neat achievement after 50 years!

Where do we store this waste? After all, it still needs to be stored securely for 300 years. Finland has built Onkalo for this, where it can be stored forever without problem in stable geological deposits of thick layers of clay that have not changed for many hundreds of millions of years.

So WISE’s statement is completely false on all counts: it is not dangerous for hundreds of thousands of years, but only 300 years, several solutions are under development, and the final storage is in Finland.

In addition, it is worth pointing out that in the past 70 years of nuclear energy, there have been exactly zero deaths as a result of the temporary storage of the waste, a stark contrast with the fossil fuel industry. The waste is a known amount, which can be managed well and in that sense is actually an awesome deal compared to all other forms of energy generation.

In a previous article we used a calculation example in which we supply Europe for almost all energy with 250 EPR reactors. How much waste does this generate?

In the first place, the power of the EPR is 1650MWe, which is a lot higher than the 485MWe of Borssele. Roughly speaking, an EPR would therefore produce 5m³ of high-level radioactive waste per year. For 250 reactors, this means 1250m³ each year. However, if we deploy fourth-generation reactor technology at a later date, it’s not as if this material is going anywhere, we reduce this volume to 1%, or 12.5m³ per year. We will then have to store this in Finland for at least 300 years, which amounts to 3750m³ for this entire period. This is the equivalent of, give or take, a hundred sea containers.

Nuclear waste is not an actual problem.