The argument is well-known: existing nuclear power stations are fine and help in the fight against global warming, but it takes too long before we build new ones. Let’s tackle this argument once and for all. If we want to, we can continue to mass-produce nuclear power plants continuously.

The problem with sun and wind

The claim against nuclear energy has a mirror in a claim for solar and wind energy, as these would be ‘fast’. Reference is often made here to the ever-increasing growth that is achieved each year with sun and wind. See, for example, this graph from the Dutch Central Bureau for Statistics: 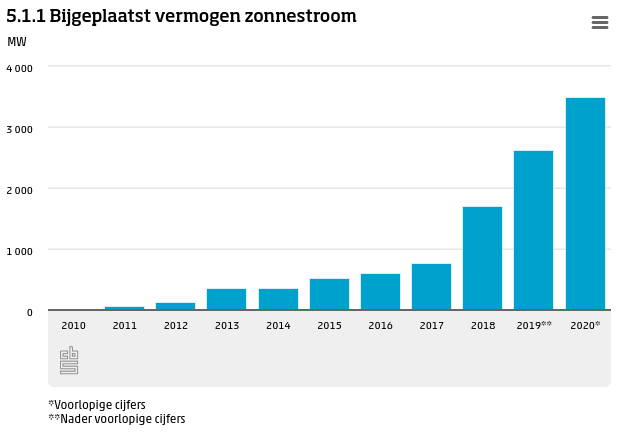 However, this is a misleading picture, in two ways:

What is said here about solar energy is broadly applicable to wind energy as well.

There are important indications that this growth will slow down sharply in the coming years. For example, the IEA has calculated that to arrive at sustainable development (in jargon SDS, or Sustainable Development Scenario), up to 42x more lithium, 25x more graphite, 21x more cobalt, 19x more nickel and 8x more manganese needs to be mined by 2040. 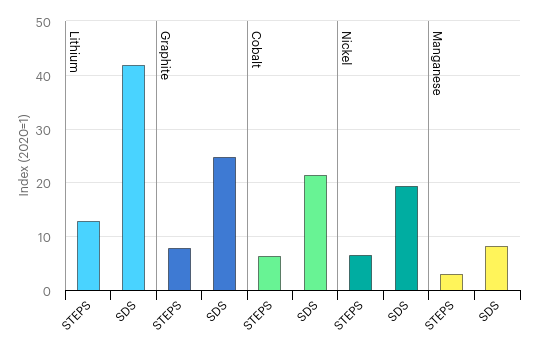 The IEA also notes that it takes an average of 16 years for a mine to go into production, from discovery of the source to exploitation. They state:

These long lead times raise questions about the ability of supply to ramp up output if demand were to pick up rapidly. If companies wait for deficits to emerge before commiting to new projects, this could lead to a prolonged period of market tightness and price volatility.

In short, we have been working on this alone for many decades.

In addition, large investments in the energy grid will continue to be necessary in the coming decades. Every so often we hear that the energy grid is ‘full’, and solar and wind energy play a central role in this. This has to do with the decentralized way in which solar/wind does this, which means that you have to set up your energy grid differently. This costs a lot of time and money.

Let’s start with an overview of the historical construction times in France, according to the IAEA PRIS database. We count from the start of the construction period until the date on which the plant started to supply commercial power. We specifically target France because the EDF, the builder of their plants, is the most realistic candidate for new reactors in the Netherlands and elsewhere in Europe. We take the 10 most recently connected reactors to get an idea.

The first thing that strikes you is that France has not had any new reactors connected to the grid for twenty years. Historically, their expansion began with the Messmer Plan, where then Prime Minister Pierre Messmer announced in 1974 to switch to nuclear power. As an aside, the consideration here had nothing to do with climate change, but was a consequence of the oil crisis a year earlier and the realization that they wanted to strategically reduce dependence on oil as a fuel, and thus the dependence on the OPEC countries.

The average construction time for all 10 reactors is 124.5 months, just over 10 years. What is striking is that the P4 REP 1300 model (97 months) is much lower than the later N4 REP 1450 model (166 months). 20 reactors were built of the P4 model and they were the workhorse of the Messmer plan. So there was ample experience with this model, which undoubtedly helped in the shorter construction times.

If we look at the current construction projects of the French EDF, it is based on the EPR reactor. Of these, three are currently under construction in Europe, and three have been completed, in Finland and China. The reactor in Finland, OLKILUOTO-3, is expected to have a construction time of 208 months (from August 12, 2005 to an expected commercial delivery in December this year). In China, TAISHAN-1 and TAISHAN-2 took 109 and 113 months respectively. The average construction time is therefore 143 months. With this it still scores better than the N4.

To understand why the EPR is such a headache for EDF, we need to look at its history. There are three factors that play a role here:

The EDF has meanwhile focused on further development of the EPR reactor, called EPR2. This design removes a lot of the complexity, which benefits the construction time (and therefore costs). This design will still have to prove itself, and there are no concrete plans to build it anywhere.

For a European approach

Earlier this month, the European Parliament characterized nuclear energy as a green investment. It makes sense to think about a nuclear strategy at European level. In a calculation example in a recent piece, I already calculated that 200 EPR reactors could supply us with about 75% of the primary energy. Say we set a goal to build 250. This provides us with 94% of the primary energy. The remaining 6%, we would then be able to achieve with, for example, more efficient energy consumption.

With these 250 reactors we produce more than electricity. We can also produce a lot of heat with them. In fact, we have enough to run a considerable number of dedicated industrial heat-systems, where temperatures of up to 300 degrees Celsius can be used for all kinds of applications, such as greenhouses. Furthermore, residual heat can be used for district heating (as is already being done in the Czech Republic and Slovakia).

We can also build a number of specialist “Very High Temperature Reactors”, which reach much higher temperatures of up to 950 degrees Celsius. We can use these types of higher temperatures industrially. For example, we can use it for a form of hydrogen production called thermochemical separation, which is more efficient than electrolysis, making it a good source of fuel for various applications.

If we want to build 250 reactors and be ready by 2050, we will have to start 10 projects for a new reactor every year. Suppose the construction time for the EPR2 is reduced to an average of 120 months due to the simpler design and the experience gained, then we will not have a reactor for the first ten years, but after ten years we will connect 10 reactors to the grid every year. Things will then quickly move to zero greenhouse gas emissions.

As I mentioned earlier, we will need a lot of highly skilled workers for this, with at its peak some 1.5 million jobs on construction sites themselves and at suppliers. After being built, this concerns about 100,000 jobs for the management of the nuclear power plants. A large-scale investment in education is therefore part of this plan.

Is 1.5 million workers realistic? Although it is not a small number, we are talking about less than one percent of the working population in the EU. These are well-paid and unionized jobs. An investment in nuclear energy is therefore a step forward for the labor movement. This is in contrast to solar where self-employed constructions, and therefore less secure work, are much more the norm.

We can quickly expand nuclear energy. For an individual reactor, the construction time is on the long side, but this is irrelevant. Because when produced in parallel, nuclear power is unbeatable. The Messmer plan increased the share of nuclear energy in France from about 20% to 70% in 20 years. This can be achieved again, now at European level, if we choose to.